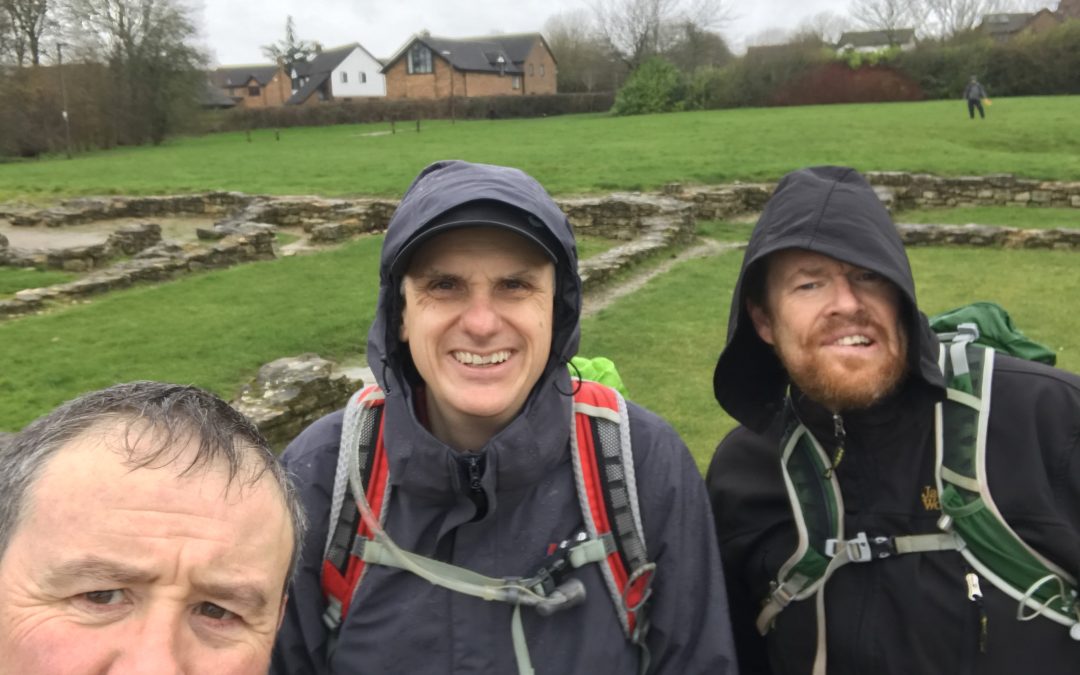 So, who was this Dennis who caused so many MoB (AAV), upon hearing of his imminent arrival on Sunday 16th February, to opt for a comfortable Sunday morning between the sheets? I can only think that the Dennis they had in mind was Skinner, the Beast of Bolsover, who caused them to quake and reevaluate a their decision to join the first Table walk of the 2020 season with fears of being swept away and mauled by a large ravenous and destructive storm.

So it was that Brothers Ondy, Nelson and Temp set out bravely to fly the flag for the MoB and take on the worst that Dennis could throw at them. As an early season sharpener the Brothers set out from Great Linford to walk the millennium trail through some of the more interesting and picturesque, nay one might even say pastoral, corners of Milton Keynes.  The Dennis that accompanied the early part of the trek was a benign and gentle character, perhaps it was Thatcher, always there in the background looking after the main protagonists whilst offering a comforting word and nudge in the right direction. This part of the walk took us along the banks of the Grand Union via Joan’s Piece which was one of the less kempt and scruffy parts of the day’s travel. Quite what Joan does at his piece and with whom is anyone’s guess but you wouldn’t want him camping in your vicinity based on the detritus that we observed.

As we progressed to Bradwell  Windmill Thatcher gave way to The Menace as the persistent fine rain began. It is at such moments that one needs BSR to offer the drizzle cream but we had to plough on without his helpful interventions. Our entry to Bancroft Park was greeted with a scene of terribly poor water management. Flooding barred the way but, as one would expect of MoB, an alternative routes was found and the obstacle overcome. The reward was to discover a genuine Roman villa – I kid you not, there is a Roman villa in a park in the middle of MK. We stopped to take a photo of this discovery before ploughing on towards Loughton and the National Bowl. We stopped at this point to pay homage to what is planned to be the new training facility for the best football club in north Buckinghamshire and reflected on how appropriate that this scene of such legends as err, people I can’t think of right now, will be graced by current legends such as Dean Lexington, Alex Gilbey and Kieron Agard.
The route then took us in a north easterly direction toward Woughton on the Green where we stopped to refuel; at least Nelson and I did. Ondy had performed another one of his legendary feats of disorganisation and was armed only with a banana and a small packet of crisps for this endeavour. However, men of Tingewick are made tough (well, some of them are) and he was not bowed in the face of the return leg which stood before us.

After a short stretch along the canal we then struck out for Willen Lake. At this point The Menace gave way to Law which added a biting, tenacious and battling wind to the persistent rain. We trudged on, stopping only to admire the handiwork of Blind Jeff Snr. who had built the extravagant water management systems around Willen. We all expressed some surprise that the recent weather systems had not significantly affected this part of MK – BJ Snr is a true MoB.

The final stretch of our adventure took us NW back to Great Linford where the Nags Head awaited with some well-deserved Timothy Taylor’s to invigorate tired limbs and sore feet. This was a marvellous way to begin the season which will take us to Molverns, Yorkshire and Shropshire in 2020. Within the gentle and warming confines of the pub we were sheltered from Dennis but, in a way, he joined us in the form of Norden who characterised the gentle banter and friendly camaraderie of a pint with Brothers ??✊